Rats are often used in laboratory experiments. The Office of Technology Assessment estimates that between 3.4 and 3.7 million rats are killed annually in research laboratories, and estimates from other sources range as high as 23.6 million every year.Rats differ markedly from humans in many respects, making rat experiments difficult to extrapolate to humans. 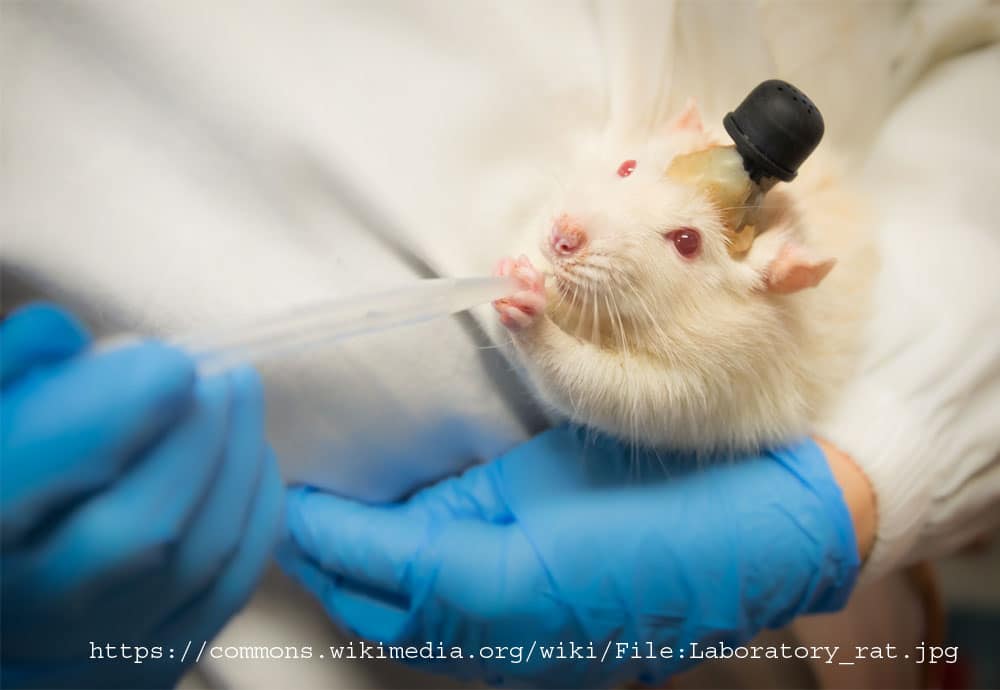 Heart disease is the leading killer of American adults. But rats are very different from humans in the ways their bodies process fat and cholesterol.

For example, rats have a much higher activity of the liver enzyme 5-desaturase, which is used in the body to change the chemical structure of fats.2 This enzyme is found in various tissues in the body, including platelets, the liver, the adrenal glands, the kidneys, and fat. The result is that “the rat is not an appropriate human model for studies involving lipids,”3 according to a researcher at Boston’s Tufts University. Another researcher wrote, “It is not possible to extrapolate directly from rat to human studies because of differences in plasma lipoprotein [cholesterol and triglycerides] metabolism between the species.”4

In humans, bile acids are formed from cholesterol in the liver, then excreted into the gallbladder and from there into the intestine. Rats do not have a gallbladder,5 so their bile acids are secreted directly into the intestine. Rats manufacture a bile acid called muricholic acid, which is not made by humans.6 Researchers believe that muricholic acid is responsible for the rat’s ability to quickly eliminate cholesterol from the body.7

The results of these differences are that, unlike humans, rats are very resistant to changes in serum cholesterol, and are also resistant to diet-induced plaques in the arteries. To produce these lesions in rats, they must be fed a combination of cholesterol, thiouracil (an anti-thyroid drug), casein, and cholic acid (a bile acid).8 Humans need only add fat to their diet to show such lesions.

Rats have much higher levels of the enzyme ATPase in the heart, which is important in energy metabolism, so they are very resistant to digitalis drugs used in humans for heart failure.9 They also have differing anatomy in the cardiovascular system,9 and their normal heart rate is 300-500 beats per minute.5

Cancer is the second most common cause of death in the U.S. Yet rats differ from humans in many ways that have major effects on cancer research.

Beta-Carotene and Vitamin A: Beta-carotene and related compounds, called carotenoids, are central to cancer and nutrition research, yet rats handle beta-carotene differently from people. Rats split carotenoids within the cells lining their intestinal walls using a specific enzyme, thus forming vitamin A. Rats convert most or all dietary carotene to vitamin A. Humans, in contrast, absorb substantial amounts of unchanged carotenoids, and store approximately 15 percent of it in the body.10 On a normal mixed diet, humans store a total of 100-200 mg of carotenoids in their fatty tissue (80 percent), livers (10 percent), blood (1 percent), and other tissues.11 The rat does not store beta-carotene in the fatty tissue at all, and small amounts are found in their livers only if they are supplemented with large amounts of beta-carotene.12

Vitamin C: Vitamin C plays vital roles in neutralizing free radicals, preventing cancer and scurvy, and other physiological functions. Rats synthesize vitamin C in the liver from glucose, using an enzyme called L-gulono oxidase. Humans do not synthesize vitamin C at all, due to the absence of this enzyme and perhaps also a second enzyme called D-glucurono reductase.13

Although most animal species can synthesize vitamin C, humans cannot. At any given time, rats have 20-30 mg of vitamin C in their bodies,14 the equivalent of about 7.5 grams in an adult human.

Cancer Tests: Rats are commonly used for testing the cancer-causing potential of chemicals used in households or factories, or environmental pollutants. However, rats are poor predictors of human cancer risk. Tests done on rats and mice agree only 70 percent of the time,15 and results would apply to humans even less often.

Experimenters conducting such tests look for the development of cancer in rats. Yet rats are susceptible to different types of cancers from those affecting humans. For example, spontaneous colon tumors are rare in rats, but they are the second leading cause of cancer death in people in the U.S.

Male rats are more susceptible than humans to bladder cancer, due to high concentrations of two proteins, called alpha-2U-globulin and albumin, in their urine. J.A. Swenberg, from the Chemical Industry Institute of Toxicology in Research Triangle Park, NC, writes, “Humans do not synthesize alpha-2U. Therefore, a direct extrapolation of rat data cannot be made.”16 In the male rat, the globulin is synthesized in the liver and secreted into the blood, from which it is then filtered by the kidney into the urine.17 Alpha-2U-globulin binds with a variety of industrial and environmental chemicals. The bound protein accumulates in kidney cells, leading to cell death. This leads to reactive cell proliferation, which eventually causes kidney tumors.16 The globulin also reacts with saccharin after being filtered into the urine. This combination forms silicate crystals in the bladder, which mechanically irritate the cells and cause bladder cancer.17 The result is animal test results that do not apply to humans.

Stroke is the third leading cause of death in the U.S. But strokes and the conditions that lead to them are rare in rats and other animals.18 Animal “models” of stroke have been developed, but their usefulness has been severely criticized by the scientific community. According to researchers at the University of Iowa and the Mayo Clinic in Rochester, Minnesota, “Although animal models of cerebral ischemia have been used extensively to test new therapies in human stroke, their record for identifying clinically effective drugs has been disappointing.” Of 25 compounds which were helpful in laboratory animal models of stroke, none worked on people. These authors state, “An over-reliance upon such models may impede rather than advance scientific progress in the treatment of this disease.”19

There are other differences as well. Rats live only 2.5 to 3 years,5 so the ratio of rat to human life span is 1 to 30. Rat skin lacks the outer keratinized layer that humans have, and is thin compared to that of humans. Rats have a non-convoluted cerebrum,5 while the human brain has extensive convolutions, indicating the degree of cortex development. Rats’ incisors grow constantly,5 and they do not get plaque as humans do, if fed a normal diet.22 They also do not develop spontaneous periodontal disease.23 Unlike humans, rats have a double-horned uterus, with not one cervix, but two, and they normally have 8 to 14 babies in a litter.5 Rats have no tonsils. As obligate nose-breathers, rats are more susceptible to respiratory pathogens. And being unable to vomit, they are more susceptible to ingested toxins.24

These differences in basic anatomy and organ function mean that tests on rats can yield results which are dramatically different from results in humans.

Personal Care Truth was given permission by PCRM {Physicians Committee for Responsible Medicine} to re-post the above information.