25 Foods High in Lysine: Essential Health Benefits And How To Eat Them (Updated 2023)

Top Lysine Foods That You Should Consume

Lysine is an essential amino acid that is good for your health. Not only does it aid calcium absorption, but it also assists in the  formation of collagen. It is one of the primary amino acids that your body requires to build sufficient proteins.

Since the human body cannot produce sufficient lysine amino acids, eating foods high in lysine is an excellent way to increase lysine in your body.  Lysine also plays a significant role in boosting your immune system. For athletes, it increases energy and boosts performance.

Although everyone needs lysine in their diet, people with certain medical conditions such as diabetes and the herpes simplex virus need to develop a high lysine diet plan. This is because extra lysine in the body can be highly beneficial for their health.

Different people may require different lysine dosages depending on their overall health and lysine needs. However, the average dietary requirement for lysine per day  is1 gram (g)or 1000  milligrams (mg).

Read on to learn everything you need to know about lysine, the best way to include it in your diet, and whether or not you should take lysine supplements. 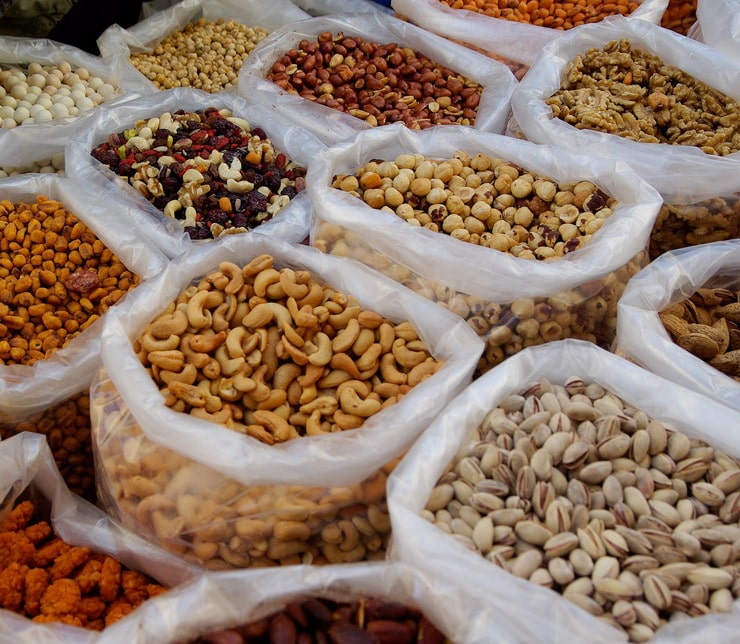 Some essential body functions like sleep or metabolism are stabilized by protein hormones. Protein hormones include melatonin, insulin, and hormones of growth.

They are made of numerous amino acid chains. Since your body cells go through constant breakdown and restoration, your body essentially requires lots of amino acids such as lysine to develop new hormones.

Furthermore, your body contains antibodies that enable it to fight diseases and infections. These antibodies are composed of different types of proteins. Proteins also make up enzyme composition which is responsible for the body’s overall processes such as digestion.

It is also the same lysine that is responsible for the formation of collagen, an essential protein that boosts skin health. Several studies have yielded the following outcomes on some notable health benefits of lysine. These benefits include:

A study that included both men and women suffering from high and acute lysine deficiency found that taking lots of high lysine foods significantly improved their hypertension.

Lysine may be highly beneficial to patients with the herpes simplex virus.  According to recent research, patients who eat lots of foods high in lysine low in arginine have a higher chance of overcoming the recurring attacks of the virus.

Furthermore, people with a severe case of the herpes simplex virus reported that sticking to a high lysine diet plan helped them cope with the symptoms of the virus.

A report by the Mayo Clinic also confirms the effectiveness of lysine in treating cold sores. According to a reputable clinic, lysine taken in a cream and capsule form is an effective remedy for cold sores.

A study involving lysine supplements conducted in 2004 found that people with acute stress and chronic anxiety could cope after taking the supplements. Another similar research concluded that lysine might help treat symptoms of anxiety such as intestinal discomfort.

A decade-long study that was finalized in 2009 found that consuming foods high in lysine may benefit people with diabetes. Since lysine plays a crucial role in helping the body produce insulin and similar hormone proteins, it significantly improves glucose response.

The two amino acids, arginine, and lysine coexist together in many foods high in proteins. They both play a crucial role in manufacturing structural proteins, enzymes, hormones, antibodies, and other vital molecules.

Both arginine and lysine pass through the same path for absorption. This results in high competition between the two amino acids. Since the body cannot produce lysine, the amino acid arginine tends to be the dominant of the two because it is naturally produced in the body.

This is especially true if you consume foods high in arginine; it could result in diminished or insufficient lysine. Therefore, if you need to boost lysine in your body, consider consuming more foods high in lysine and low in arginine or ingesting lysine supplements.

Animal Based Sources of Lysine

Since your body cannot produce lysine, you can obtain it from foods high in lysine. These include animal and plant products that are rich in this specific amino acid. Animal sources of lysine include:

All types of meat

It’s important to note that if you are suffering from the herpes simplex virus, you should consume additional lysine than average daily intake and reduce arginine.

Consuming foods high in lysine low in arginine has been proven to prevent and treat HSV. One notable animal product that is rich in lysine and which is best consumed for the treatment or prevention of HSV is grated parmesan cheese.

Its one of the foods high lysine and low arginine. On average, 100 grams of cheese contain 2.2 grams of lysine and 1.5 grams of arginine. Roasted steak also contains more lysine than arginine. About  85 grams (3 ounces) of lysine is found in an average round steak without bones and fat.

There are several lysine foods found in plants. Although the most popular sources of lysine are mainly found in animal products, they are also plenty in plant-based foods.

If you are vegetarian, you can still obtain sufficient lysine from a high lysine low arginine vegan diet. Many lysine foods also happen to be regular diets of proteins, vitamins, and minerals. Notable plant-based lysine foods include:

Typically, grains aren’t don’t make up the list of high lysine foods, but there are a few exceptions. They include:

If you would like to boost your lysine intake while cutting down on arginine, then consider eating lots of dried apricots. Dried apricots contain twice the amounts of arginine your body produces daily.

Other sources of lysine include spirulina which is a type of algae that’s essential for human consumption. Spirulina can be produced in several forms, such as supplements, powder, and whole spirulina. They all contain high lysine amounts.

Do You Need Lysine Supplements? Benefits and Risks

As you have already learned, lysine is essential for your overall health as it aids calcium absorption and the formation of structural collagen. Athletes may need to consume more foods high in lysine low in arginine for increased bone mass and muscular strength.  Vegans may also find immense benefits from high lysine low arginine vegan foods. Lack  of enough lysine may lead to the following symptoms:

If despite eating lots of foods high in lysine and it remains insufficient for your needs, you might want to increase it with supplements. Lysine supplements are easily accessible in health and food stores or over-the-counter at pharmacies.

You can even purchase them online. If you want to consume more lysine to prevent or treat a health condition, consult with your doctor before trying out supplements.

If you need to treat a health condition with lysine supplements without ingesting more arginine, then go for capsules that do not contain arginine. These are also available in plenty.

Lysine as a Herbal Supplement

Typically, lysine is also produced as a herbal supplement. There are no practical manufacturing standards available yet. Many herbal compounds and supplements have been found to contain toxic metals or other irrelevant drug compounds. Therefore, you should always purchase herbal supplements from reliable sources to reduce the risks of contamination or other effects of substandard products.

Lysine is a vital amino acid not naturally produced in the body.  Eating foods high in lysine low in arginine or using it may prevent or improve certain health conditions. It may also boost your health overall by aiding your body to produce antibodies,  collagen, digestive enzymes,  and protein hormones.

Although supplements are generally safe, it is recommended that you obtain your lysine naturally through a high lysine diet plan. For vegans, the same is also possible through high lysine low arginine vegan foods. Lysine is usually administered as an oral supplement or cream.

Lysine is generally safe, especially if taken according to the prescribed dosage. However, it has few notable side effects, which may vary from one person to another. These include:

Pregnancy and Other Side Effects

To avoid the risks associated with taking lysine supplements, consider obtaining it naturally from foods high in lysine or following your doctor’s recommendation. However, avoid using lysine supplements if you are pregnant or breastfeeding. This amino acid has been linked to weight gain. Therefore, you should eat moderate amounts of foods to mitigate weight gain and other health conditions.

There isn’t enough research to prove the side effects of prolonged intake of lysine supplements. However, consuming excess lysine can cause recurrent abdominal cramps and diarrhea. You can avoid these effects by sticking to the recommended daily dose of which products you use.

Lysine helps your body to absorb more calcium. Therefore, if you are already taking calcium supplements, speak to your doctor if it’s safe to use lysine supplements alongside calcium or any other type of supplements.

A doctor’s opinion is also necessary for pregnant or lactating mothers. Furthermore, lysine should never be used as an alternative to other medication for any health condition. Except for people with special needs,  lysine supplements are generally safe, and side effects are rare.

It is best to seek the opinion of your doctor before considering the use of herbal lysine supplements.  Professional advice from a  licensed practitioner who is trained in the use of health supplements is also recommended.

If you choose to take lysine in supplement form, take it as directed on the package or as prescribed by your doctor, pharmacist, or other healthcare practitioner. If you are taking other drugs or supplements,  do not use them simultaneously with lysine supplements without professional recommendations from your doctor.

Additionally, it would be best if you don’t use different lysine formulations in tablet form, liquid, powder, or cream unless specifically directed to do so by a health care provider. Using different types of supplements at the same time may increase the risk of an overdose.

If the condition you are treating with lysine supplements does not improve after the recommended time frame, or if it gets worse while using, then discontinue using and consult with your doctor for professional guidance on which option to take.

Always follow storage guidelines as shown in the label of the package. Ideally, you should store your lysine supplements at room temperature, safe from moisture and heat.

If you miss a specific dose of supplements, it is advisable to skip that particular dose and move to the next one within the scheduled time. It would help if you don’t use extra lysine to substitute for the missed dose, as this may lead to overdosing.

For any questions about dosing or overall use of lysine, always consult your doctor before using the products. Lysine may interact with other prescription medications you may be using. Its ability to increase calcium absorption in your body can weaken your bones and interfere with normal organ function. Therefore, a doctor’s advice is crucial under any circumstances.